My Little Pony: Friendship is Magic Fanon Wiki
Register
Don't have an account?
Sign In
Advertisement
in: Males, Characters, Unicorns,
and 16 more

Angry Ogun is the Main Arch Enemy of the Ed Trio & the original source of all darkness in the world of Equestria, due to his corruption in the past.

Long before Equestria had a name, the 3 tribes of the Earth Ponies, the Unicorns & the Pegasi doesn't live in harmony & peace. And they cared not for what befell the other tribes, but only for their own welfare. In those troubled times, as now, the Pegasi were the stewards of the weather, but they demanded something in return: food that could only be grown by the Earth Ponies. The unicorns demanded the same, in return for magically bringing forth day and night. And so, mistrust between the tribes festered, until one fateful day, it came to a boil. And what prompted the Ponies to clash? It was a mysterious blizzard that overtook the land, and toppled the tribes' precarious peace, causing the birth of the first villain, the original darkness of the entire planet, Angry Ogun, the King of Darkness, the Unicorn of Hatred & the Tyrant of Evil. But in the past he wasn't always this way.

It all started long before the blizzard incident when both Peace Keeper & Angry Ogun were twin unicorn brothers in Magic School, in their youth, who would do anything to try & help out their troubled land, but they both have different opinions on keeping peace. For one thing, Ogun wants to clear & stop the oncoming blizzard with powerful magic, but Peace Keeper wants to resolve the tribes' situation peacefully. It was then that both brothers met the most legendary wizard of all the land, Star Swirl the Bearded. Star Swirl offer them with lots of magic training that has taken them years to master. However, even with their training are fully complete, both Peace Keeper & Angry Ogun, now young adults, both still have different opinions about the situation, with the blizzard that has arrived. With bitterness & impatience, Angry Ogun heads out into the blizzard with powerful magic books, unknown to him that has forbidden dark magic inside. Peace Keeper tries to go after him to warn him, but was too late, the blast of dark magic for the first time had taken over Ogun & was knocked out cold in the snowy frozen tundra.

As the 3 tribes met together for a meeting, Angry Ogun begins to wake up, feeling the cold hatred that strengthens him for his first steps. Then he spotted something that he tend to them as his pets, the Windigos. With his powers getting stronger with every fight & hatred, Angry Ogun then realise his destiny that laid before him, begins his reign of terror all over the land with his new army of Dark Shadow Warriors & Windigos, now fully corrupted with the dark power inside his heart. Peace Keeper looked on in horror as he found Ogun, his own brother in a state of madness & must figure out a solution to stop the darkness, before it's too late.

One day, as Angry Ogun finds a new peaceful land & the 3 leaders [Chancellor Puddinghead, Princess Platinum & Commander Hurricane] with their assistances [Smart Cookie, Clover the Clever & Private Pansy], he noticed that the leaders are arguing with each other to claim that one of the tribes found a new land & neither the 2 tribes to have it. But this argument also causes Angry Ogun to grow stronger & stronger, being fed with negativity & then the Windigos traps them & their assistances in a cave. But as Angry Ogun has his moment of triumph, he was ambushed by the 3 Champions of each tribe at the same time, apparently it was Peace Keeper who wants to put a stop to Angry Ogun's rage. The Earth Pony Champion [Jackson Brawn], the Unicorn Champion [Gold Brain] & the Pegasus Champion [Green Cyclone] all noticed each other & realized that they have a common enemy & a common goal. So then Angry Ogun begins to attack them back, but once the 3 champions are nearly done for, they all noticed the Fire of Friendship defeating the Windigos & it was the 3 assistances that made it possible with the power of friendship, much to Angry Ogun's disgust.

Right when the Fire of Friendship stopped the hatred-fueled snowstorm, it created & revealed 3 new magical elements, that revealed to be the "Elements of the Great Spirits", forged by the Fire of Friendship, Peace Keeper has created the elements to combat against Ogun, with the 3 champions, each with their own personality & powers. Jackson Brawn has the Element of Unity that keeps the land united with compassion & strength, Gold Brain has the Element of Duty, in which it is their duty to protect the land with the magic of friendship & finally, Green Cyclone has the Element of Destiny, in which it is their destiny to stop the forces of evil with leadership, skill & determination. And finally Angry Ogun & his Dark Shadow Army have been defeated by Peace Keeper & the first ever wielders of the Elements of the Great Spirits & Angry Ogun was banished into the Darkness as punishment, similar to the Nightmare Moon Story.

As Equestria was founded, Angry Ogun, who was now in his new Castle of Darkness, vowed to take over the land of Equestria & destroy the wielders of the Elements of the Great Spirits, no matter how long it takes.

His Dark Unicorn Magic is his main Arsenal, that with it, he can not only create his Dark Shadow Army & uses Telekinesis as well with his Dark Unicorn Magic. He only has enough unicorn magic to gain incredible, yet false, Earth Pony strength that he can easily take out one building & with his summoned Dragon wings, at his command of his dark magic, he can fly fast like Rainbow Dash, but can barely catch up to her.

Add your characters here if your Angry Ogun's Ally

Add your characters here if your Angry Ogun's Enemies

He is Angry Ogun's son, Angry Ogun raises him as a ruthless leader with Sombra's heart becoming black as night. 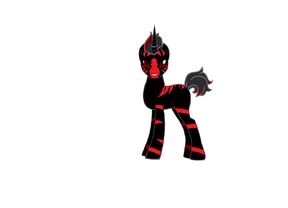 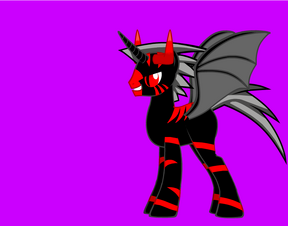