My Little Pony: Friendship is Magic Fanon Wiki
Register
Don't have an account?
Sign In
Advertisement
in: Characters, Non-Binary, Unicorns,
and 3 more

Chance Token belongs to Enigma. Don't use or tamper with any of the content or coding without their permission!

Pushed so far as a young foal, being a child prodigy isn't as glamorous as it initially sounds. Chance had so many expectations to live up to that the pressure finally cracked down on her. But they don't intend to let that stop them as one of the best unicorns in history.

Head ducked but stride long and proud, Chance is a thin and lithe unicorn. With a boxish face and a long tail, their face is framed with a mane and beard knotted with beads, the same goes for their tail. Their ankles are tipped with the same color of their mane. Unlike most ponies, their hooves are cloven. Their ears are always perked and attentive, while her eyes are always seemingly in a far-away stare.

Their green coat is swirled in red scars that they call "magic burns." Their mane is a blue color with prominent frosty highlights. Their eyes are a bit cloudy and a dark red color.

They're covered in jewelry that they constantly change. Most of what they own has certain magical properties and abilities. All but a few cheap plastic baubles that they picked up just for fun.

Stoic and strong, Chance is not much of a speaker. While she's hardly shy, Chance enjoys listening to other ponies talk, hearing what makes them happy and what makes them upset before initiating in any conversation. She can't stand the idea of disappointing others so "studies" before making friends or starting conversations. Their surprisingly calculating behavior surprises ponies and she can't help but feel a bit patronized after her blindness being commented on so much before in the past.

Chance hates to be underestimated and believes she is much more capable than others expect of her. Surprising other ponies is a bittersweet feeling. Being treated like a normal pony is surprising, at the same time. They're often caught off guard and they struggle to hold conversations they haven't prompted or entered on their own accord. They love being asked about magic advice. They're so passionate about helping ponies and teaching others that when unicorns go out of their way to ask, they can't help but feel proud.

Chance was a skilled magic user. She was a child prodigy, casting difficult spells and deciphering the wording of those such as Starswirl the Bearded soon after she learned to read. She was ambitious and the admiration of her parents drove her forward - they said their foal was more powerful than Princess Twilight Sparkle at her age! - until the day she took her powers too far.

Since then, Chance has found a new dependence on magical objects, enchanted and cursed alike, to carry out day-to-day chores, and a few more complicated spells. Because of that, they have developed a knack for finding magical objects, even if it seems like a bit of a dependence.

She's learned an equivalent for pony Braille and still tries developing spells, seeing what a broken horn can do. She takes great care not to get in a similar accident that she got into as a child.

Ever since Chance was a young foal, they had showed great talent in the field of magic. Their parents were jubilant! They bought all the spell books and gave their little spellsmaster all the magic tutors they could find. Chance saw all of this praise, all of this admiration for all this talent made them crave more and more. All they wanted to do was continue impressing their parents. Mastering new spells, learning more techniques, and pushing themself harder and harder.

They strained themself, trying to crack spells that even the Princesses dared not to try, and their horn had shattered, with a magical explosion that burned into their memory with scars that blinded them and left red marks all down their body. They lost all ability to cast spells as they used to. Years of practice and rigorous training all gone. Everything their early cutiemark had stood for was for naught. They were crushed.

All the magic tutors and spell books were replaced with lessons to read Braille and they were slowed down in all their studies. They kept trying to show their parents what they could still do. They still thought they were destined to do something great with their magic. After a few accidents around the house, everyone went quiet about magic, and their parents avoided the best they could while helping her get used to getting around blind.

Chance grew up being blind, having no magic, but enjoying every chance they got to experience with magical objects during their studies outside of their old magic school. So much so, that when they finally graduated, they went on to become a teachers' assistant at a magic school for gifted unicorns. Though, it wasn't long that a unicorn who couldn't control their magic raised a few eyebrows of the young ponies learning from them.

The unicorn quickly grew tired of being talked down to, by students AND staff. When they heard mention of enchanted objects that could help regain their magic abilities, they took advantage of the offer. Chance was not hesitant to purchase charms and objects of questionable properties, and when they attended school again, the students and teachers noticed her new sense of style and accessories. She had a more noticeable sense for magic and was a bit quicker to snap at students doubting her abilities or knowledge. Chance passed her new fashion off as a liking for simple little trinkets she picked up in tourists traps and simple gift shots. 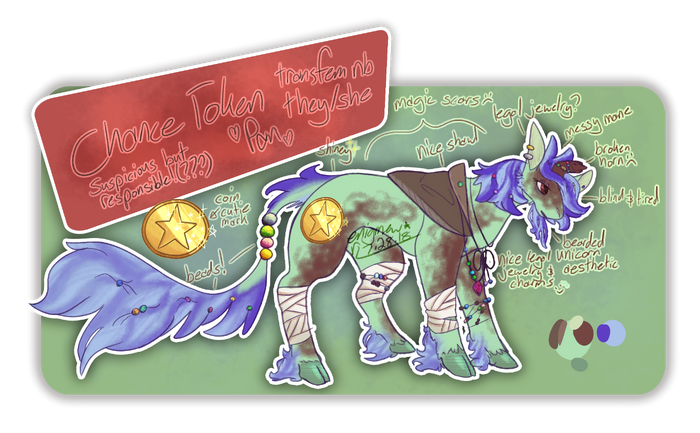