My Little Pony: Friendship is Magic Fanon Wiki
Register
Don't have an account?
Sign In
Advertisement
in: Females, Earth Ponies, Characters,
and 2 more

Flutter Heart is a strict, bossy and rarely friendly earth pony. She lives in Ponyville currently.

Flutter Heart is a very intellignt earth pony who doesn't laugh all that much. She can be really strict and mean but can be nice (occasionably). In Canterlot, as a child, she wanted to be an Alicorn so she can use magic and fly. She is bossy at most times but surprisingly has friends that understand her.

If canon, she would be voiced by Barbara Mambolo.

Flutter Heart may be a strict person but is very loving in many ways. Her cutie mark is a winged heart and it represents love and cherish.

Flutter Heart was born on a snowy day in Canterlot with her Mum and Dad. When she got home, she was living with her Dad, Mum, and Aunt as a kid. Later on, her Aunt got her own apartment and her father died. She and her mother had to move on, hough Flutter Heart moved on at a very young age. Flutter Heart wanted ot grow up quick so she can help her mom. She cared alot for her mother and later earned her mark! She was very happy about it and very proud. Especially since she was really young.

Soons he was older and moved to Ponyville. Flutts wasn't ready to leave her hometown. if anything she wanted to be an alicorn after thinking EVERYONE here was one. When she foun out they weren't she was pretty relieved but still pretty embarassed by the fact she didn't have any abilities such as magic, flight, or magic and flight. After being toured she and her mother found a cottage to live in. But when Fluttershy was "prepared" her mum had to leave her so Flutts can move on. She did fine but after her mom left she was pretty mad. So she wanted to prove that she was ready to leave the nest.

She soon got a job as an author. She wrote a lot of things and almost thought she would have 2 cutie marks. Unfortunately she met 5 other girls who tried to get her to fit in after being bullied. Though she would easily get mad at them, she remembered to cherish them in all friendly ways. Her friends names were, Moonlit Shadow, Earthern Gust, Visionary Hex, Melody Breeze, and Bright Charm.

She learned life lessons alot and had much warnings, but she always remembered to KEEP CALM AND CARRY ON.

Her voice would be similar to that of Zoey from Total Drama: Revenge of the Island. Click on the video to hear what her voice sounds like. 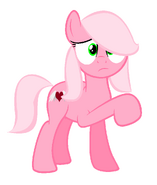