Princess Lunestia belongs to me, LoveShepherds. Please do not edit her without my permission. Thank you^^

Princess Lunestia is a female Alicorn Princess. She has an orange coat with an orange horn with silver magic aura and a pair of orange wings on her back. She also has a pair of silver Princess shoes that she wears on her hoofs and she also wears a silver armor necklace around her neck with a Solar Ecliose symbol on it. Her crown is also silver with a yellow and black line on the left and right. Her mane is black with blue and yellow strips. Same with her tail. Her cutie mark is a Solar Eclipse symbol. She also has white camouflage eyes.

Solar Crash is the dark alter ego of Princess Lunestia. Her coat color stays the same, but her mane and tail becomes much longer and wavier surrounded in space stars. She has silver armor all around her body and her shoes upgrade into longer shoes. In the middle of her armor is a black jewel. Solar Crash keeps her Princess Crown but her silver armor necklace is removed. Solar Crashes eye color is dark grey and is cat like. Her sclera is also light orange and her cutie mark turns into a silver and dark orange Solar Eclipse sign.

Princess Lunestia is known to have a kind and sweet attitude but an overprotective personality. She always wants to check on her sisters to see if there good and usually sits outside and watch Equestria for crimes and Lunestia likes to help people if they need her help or she usually speaks to people in a kind tone. Lunestia is kind of peaceful though. She sometimes turns special magic kindergarten pony’s into Alicorns when they succeed and then they become the future princess of Equestria. So far, Lunestia is a good Princess.

Solar Crash is known to be a mean and cruel goddess. She always likes to cast powerful dark spells on the ponys in Equestria and her main goal is for the Solar Eclipse to be stuck forever. She also gets angry fast when a pony is talking back to her or if a hero pony is winning and she is losing. Solar Crash doesn’t really battle her sisters Nightmare Moon and Daybreaker, but she does know how to cast very powerful dark magic spells that can possibly kill any pony. But So far, Solar Crash is a dark goddess and is a powerful Alicorn that is the strongest among her sisters Nightmare Moon, and Daybreaker.

Lunestia grew up with her sisters Princess Luna and Princess Celestia and her mom Queen Galaxia. They all lived in a mythical palace that was as beautiful as the night sky. Lunestia was the last one born out of her sisters. Her sisters were in their early teens when she was born. Lunestia was born an orange Alicorn with very tiny wings. And her eyes were unexpectedly camoflage white. Queen Galaxia and King Cosmos were surprised. They’ve never seen a pony born with white eyes. Though, they’ve decided to name her Eclipses Lunestia since she looked like a beautiful Solar Eclipse.

A couple of years have past and Lunestia worked on making her parents impressed by being the best princess she can. Her parents were impressed. So they gave her her very first princess crown. Celestia and Luna already has there crowns since they were already mature and responsible princesses. So then it was time for Lunestia’s award. Lunestia was 5 around that time.

Queen Galaxia is Princess Lunestia’s mother. And they both share a great relationship with each other. Lunestia learned all her skills from Galaxia. Lunestia even knows how to do some Galaxy tricks now since Galaxia taught her. Galaxia also has taught Lunestia on how to push the moon over the sun. That was how she then got her cutie mark. They also love flying together or watching Celestia raise the sun or Luna raising the moon.

King Cosmos is Princess Lunestia’s father. They both like to spend time with each other. King Cosmos likes to do connect the dots in the night star sky with Lunestia. And King Cosmos likes to teach Lunestia on how to keep Space functioning right. Lunestia has also learned so much from him. And she appreciates how much Cosmos has done for her to make her the best princess that she can possibly be.

Later, Lunar finally gets her cutie mark for performing her Eclipse acts right. Then Solar and Lunar made a new school that they’ve summoned with their horns. It was called The School of Eclipse. Princess Lunestia and Prince Luclipse were the main leaders of the school, but Solar and Lunar were the founders and the bosses of the school. There, they’ve taught a lot of magical Unicorns or Alicorns about the Solar and Lunar Eclipse and what it does to make our earth very magical and peaceful. 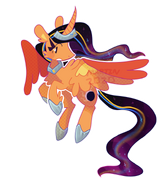 My Little Pony: The Movie Appearance
Community content is available under CC-BY-SA unless otherwise noted.
Advertisement