My Little Pony: Friendship is Magic Fanon Wiki
Register
Don't have an account?
Sign In
Advertisement
in: Characters, Earth Ponies, Females,
and 2 more

ShutterBeat is an earth pony and is a D.J./Singer/Popstar. She grew up in Ponyville and has a little sister named StarBeat.

ShutterBeat is an earth pony. She has a tan coat with a blue and pink spiky mane and tail. Her eyes are also purple. She usually wears a blue jacket with 2 blue thunder bolts on each side and her cutie mark is a heart with a music note.

ShutterBeat is known to be a kind and caring pony. She cares a lot about her friends especially her little sister StarBeat. She also loves her family so much. ShutterBeat would do anything for her sweet and very caring family. And she likes to sing songs for them at the end of her sold out shows. ShutterBeat loves singing and dancing. She’s been doing it ever since she was a kid. And she still likes it. Though, ShutterBeat mostly sings. But she has time to dance in her spare time. ShutterBeat is also very cool with everything except bad things that are harmful. ShutterBeat likes to do stuff with ponies. Weather it’s really fun or really boring. She loves it a lot when she makes people happy. ShutterBeat usually speaks in a very nice tone when meeting new pony’s. She doesn’t mind if the pony’s are shy. She just loves to meet and greet to make people feel very welcome in Ponyville and Equestria.and is very friendly to everybody in Ponyville.

While ShutterBeat was growing up, she started to work on her music career and focus on being a famous popstar and creating all sorts of fun pop music for everyone in Equestria to enjoy. She was successful after a couple of weeks. And she was called Equestria’s next big rising star. Her music were hits and they even beat off Countess Coloratura’s music. ShutterBeat also had little fano. A lot of Filly’s in Ponyville loved her music. Sometimes ShutterBeat pays them a visit to talk to them about how her career started and how she started to make music in Equestria.

This is how ShutterBeat got her cutie mark. When she was was 5, she sang loudly on top of her roof that attracted lots of pony’s to sit and watch her sing. When she was done singing, all the pony’s were stomping and cheering. And she was crying with joy. And then, there was a big bling on her hips. And then she looked to her left hip. There was her very first cutie mark! And then she was crying for more joy. She felt happy. Know she knew what her true and amazing talent is.

When ShutterBeat was 7, her mom, LoveBeat, was pregnant with a female earth pony. ShutterBeat knew that she was gonna be a big sister. And she was excited about it. When the baby pony was born, ShutterBeat starred at her. The infant stared back. LoveBeat decided to name her StarBeat. ShutterBeat liked that name. A couple of hours later, ShutterBeat and her parents returned home. They were happy to have little Star in the world.

When ShutterBeat turned 14, she wrote her first pop song ever! And it was blowing up the charts like crazy! ShutterBeat then started to develop big fans. Almost a hundred asked her to sign her hoof. And she did. ShutterBeat felt famous. She never thought that she would be this popular really fast.

Currently, ShutterBeat is 17. And she’s making lots of fun pop music for any pony to enjoy. She felt good about it. And right now she’s feeling pretty good about her success.

Stories She Appears In

ShutterBeat is the pony that I came up in mind. So I decided to make her. The design is a base (credit to DeviantArt). So I used the base and drew over it. I started off with the lining and then I filled it in. I’ve decided to make ShutterBeat tan because it was a random choice that I made. And then I added some colorful hair. I decided to make it pink and blue to match the cutie mark and jacket. Speaking of which, I decided to put a blue jacket on ShutterBeat so she can look like the rest of the celebrity pony's since all the celebrity pony’s wear clothes. I also used a cutie mark from the web that was free (credit to ClipartKey). So I chose a heart with a music note because I know that ShutterBeat shows a true passion for music. I was gonna make ShutterBeat a unicorn, but that was a little too random. So I made her into an earth pony which seemed to work out for me. I made her eyes purple since purple is a pretty pop color. And ShutterBeat is a popstar pony. So that’s the design on how I made ShutterBeat. Hope you like her! 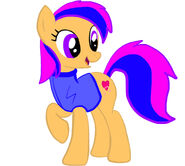 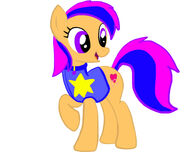